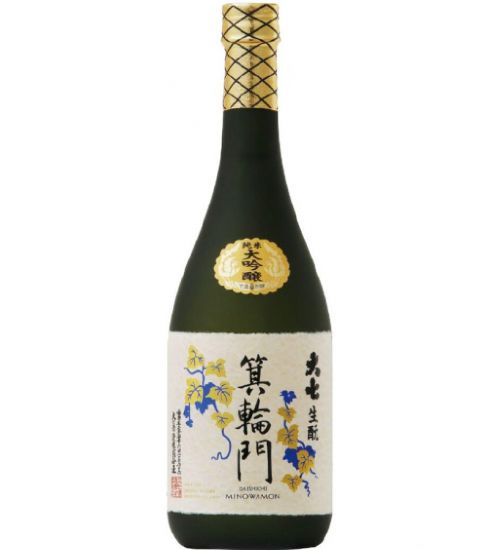 "Daishichi Minowamon” is a multiple award winning junmai daiginjo made with the kimoto method.  It is the first sake brewed with the super flat rice polishing method using Yamada Nishiki sake rice. The sake is aged for elegance and depth. It has a rich umami aroma with a gentle, mellow texture of remarkable delicacy. Well structured, great balance of acidity and sweetness.

Daishichi Minowamon has won gold medals in both the ginjo and junmai sections at the Tohoku Sake Awards. Abroad, it has earned the highest praise from world level professionals at the Vinexpo, the largest alcoholic beverage fair in the world held in France, as well as from top-class restaurants in New York.

★★ In a questionnaire survey among 140 sake specialists such as “Sake Sommeliers”, “Sake Masters”, “Shochu Advisors”, etc., “Daishichi Minowamon” was selected as the best in the sake category [for 2 consecutive years]

★★ In 2009, platinum award in the category “Sake which fits to crab” at the “Great Jizake Show”

★★ In 2010, platinum award in the category “Sake which fits to ikura (salmon roe)” at the “Great Jizake Show”

★★ In 2011, platinum award in the category “Cold sake which fits to cheese” at the “Great Jizake Show”

With three platinum awards, Minowamon entered the Hall of Fame

Daishichi global fame comes from combining modern technology innovations with traditional methods.  It's an award winning trend setter than defies mainstream sake trends.  For example, it only uses the traditional, labour intensive Kimoto Style instead of modern time-saving methods to make it's rich and mellow sakes.  They pioneered the super-flat rice polishing method where a 50% super flat polish is equivalent to a 35% conventional rice polishing ratio because more of the oval rice is retained and exposed while polishing each grain of rice as little as possible. They also pioneered the first Anoxic Bottling system to bottle sakes without exposure to air.