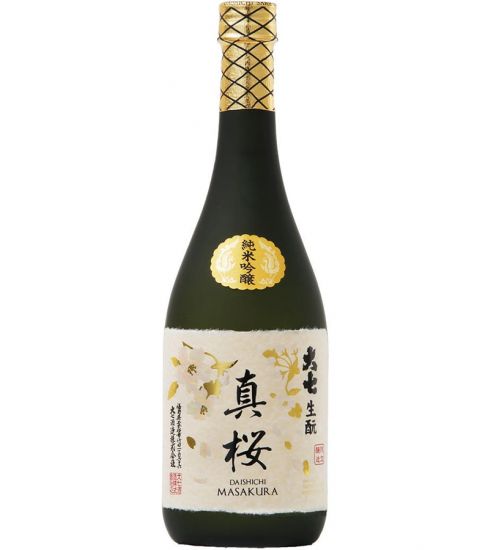 Rather than simply attaching the appellation ginjo to a product, we at Daishichi were of the opinion that such a sake would have to carry an unmistakable high class stamp and give the impression of forming its own lineage. Instead of opting for the bottom-up way of product development where we would raise the polishing ratio of one of our products already on the market to produce a “middle level ginjo,” therefore a top-down approach was necessary: stepping down in style and quality to ginjo level from a top class existing product. Of course, during that process we gave its own individual character to Masakura and we took care to create a junmai ginjo with a high grade of perfection typical for Daishichi. The special circumstances of its origin are clear from the character of Daishichi Masakura. While basically being a ginjo, it has a richness and maturity typical for junmai made with the kimoto method, and there is a wide range of ways to drink it, from cold to warm. Also as regards food pairings, it is an almighty sake that fits to the whole meal, from delicate starters to the heavy main dish, and that since its release has been praised by many connoisseurs in various settings. What if you were allowed to bring only one bottle to a desert island? We recommend this sake.

★★ In 2012, gold award in the category “Sake which fits to hard cheese” at the “Great Jizake Show”

★★ In 2013, gold award in the category “Sake to be enjoyed with Chinese food” at the “Great Jizake Show”

★★ In 2014, platinum award in the category “Sake to be enjoyed with Italian food” at the “Great Jizake Show”

Chill to around 12-15 degrees C. If you prefer, try serving it gently warmed.