It features a mellow, fluffy taste and a crisp aftertaste. Hatsumago sake is manufactured with traditional Kimoto brewing method which was used for 300 years.  It's rare today because it is labour intensive technique.

HIYAOROSHI is seasonal sake which is released in the autumn after keeping in the low temperature room for developing unique flavors. “Momiji Roman” Junmai Hiyaoroshi has the calm taste with Kimoto flavor. Please enjoy the harmony of sweet flavor of rice and Umani taste with 15℃-18℃. 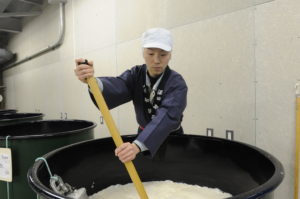