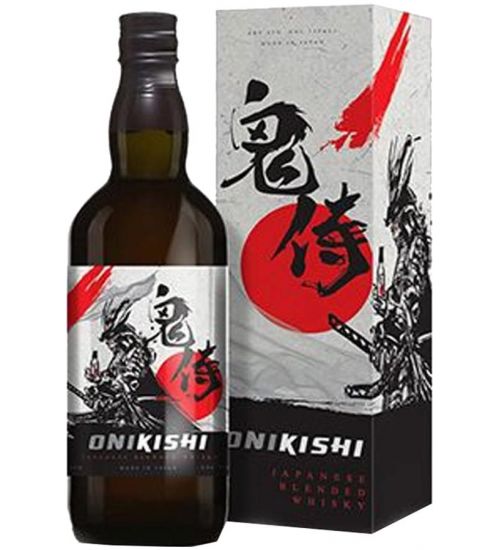 Onikishi derives its name from the Japanese words “Oni” meaning Demon and “Kishi” meaning Knight, which we also combine with our Japanese/ Chinese name “鬼侍” which translates as Guǐshì (Gway-Shee) in Putonghua and can also be referred to as Oni Samurai in Japanese.

Onikishi Japanese Blended Whisky sits where Johnnie Walker Black might against international blended whiskies yet is priced to compete against more entry level premium Japanese whiskies. This varies greatly across countries depending on competition.

Onikishi charts a path through the tapestry of Japan, an eternal spirit that will evolve through the ages, always pioneering while keeping deeply rooted in its traditions,
defending the honour of the noble liquid and keeping alive The Enduring Essence of Japan.

NEAT – A woody body from American white oak nuanced by honey tones give way to a heathery and myrtle floral scent touched by citrus.

ON ICE – Chilling mutes the woody scents and accentuated the citrus myrtle flavour and brings forward a touch of vanilla.

NEAT – An immediate rush of honey and vanilla gives way to a more robust caramel that coats the mouth and makes way through the mid palate to a warmer cedar smoke.

ON ICE – Citrus flavour integrated into the creamy feel of caramel with a subtle undertone of cedar.

NEAT – A refreshing kick of yuzu zest contrasts the opening sweetness to end as it begins on a woody note.

ON ICE – The mid palate carries through to the finish ending with just a touch of warmth.